How the Kansas City Chiefs BLEW IT Against the Chargers 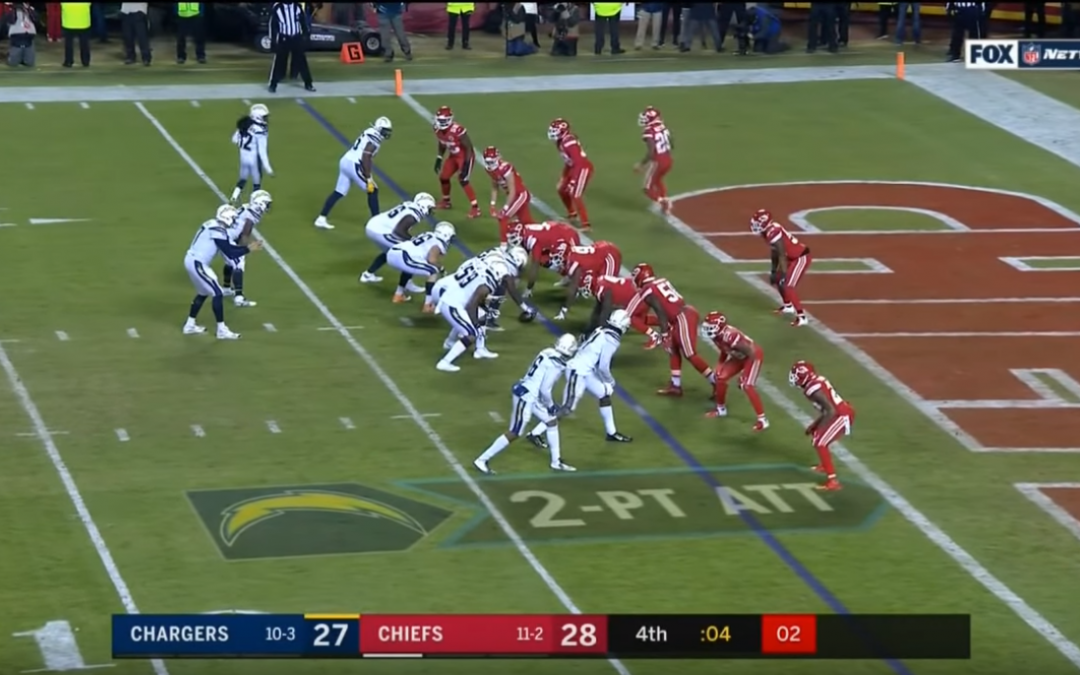 The offensive look: The Chargers start in a 3×1 formation to the wide side of the field and motion Travis Benjamin (#12) across the formation to identify man vs. zone coverage. He identifies man, since the DB on Benjamin follows him across the formation. Philip Rivers knows he’s rolling right, and throwing to one of the receivers running the pick route combo (let’s call it a “rub” route since we’re talking offense here).

The Defensive Look: The Chiefs actually have a pretty god look pre-snap in our opinion. They have 5 men on the line of scrimmage (DT, 2 Des and 2 LBs) with 6 in coverage. They opt to play straight man coverage, but choose to bracket (double cover) antonio gates (#85). When Travis Benjamin motions across the formation, the DB covering him runs across the formation with him.

Where the KC Chiefs screwed up: The Chargers’ pick route concept is one of the most common goal line pass concepts in football – from youth football all the way to the NFL. Typically, when receivers are either in a bunch, or lined up close to eachother, the defense will make a “banjo” call in order to counter pick plays. Banjo is a call which tells 2 defensive backs to essentially play a man/zone combo coverage. The DB lined up inside (#23, Kendall Fuller) should cover the receiver who runs an inside route while the DB lined up outside (#22, Orlando Scandrick) should cover the receiver who runs an outside route. The banjo call clearly doesn’t get communicated very well, because Fuller played banjo (by covering the inside breaking route of  #16, Tyrell Williams) while Scandrick played a true man coverage (by covering the man he was originally lined up across from, #16 Tyrell Williams).